Another example of the corrupting influence of the forest industry has come to light in which a senior Government Minister has allowed his integrity to be questioned as a result of the antics of a logging company.

With corruption and poor governance now clearly recognised as the primary cause of PNGs debilitating social and economic condition, it is the failure of Government and other stakeholders to deal effectively with the logging companies that are at the root of the problem that is preventing any positive progress.

The lawyer engaged privately by the Minister for Forests, Patrick Pruaitch, to defend an election petition case was paid K 150,000 by the State as part of the controversial Kiunga-Aiambak Deed of Settlement.

Mr. Pruaitch engaged Joseph Yagi of Yagi Lawyers to represent him in an election petition case that was heard in Vanimo on March 7th 2002. Pruaitch, the Member for Aitape-Lumi, was defending a court case brought by the man he unseated as the sitting MP, Mr. Eddie Soweni. 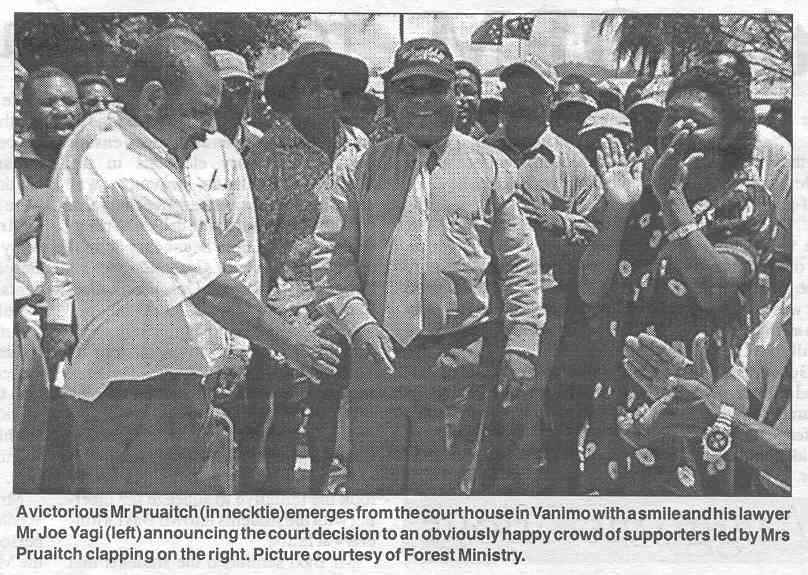 Joseph Yagi is the lawyer who acted on behalf of the controversial logging company Concord Pacific in relation to the Kiunga Aiambak Deed of Settlement. As part of that Deed, which has been roundly condemned by politicians, public servants and civil society, Yagi Lawyers was paid K 150,000 by the State.

Although the Forest Minister has stated his Government does not recognise the Deed and will not execute it, Forest Service insiders say that Yagi Lawyers were paid their K 150,000 back in December last year and that the Minister has not given any instructions for the money to be reclaimed.