Iamo under fire from all sides: illegal logging added to charges of incompetence

The suspended Secretary of the Department of Environment and Conservation is under fire from all sides as his involvement in a number of illegal logging deals is uncovered.

Already charged on 8 counts by his own Minister for his incompetence in managing his Department, Dr Iamo has now embarrassed the Minister for Forests by deceiving him into issuing illegal logging permits.

This has angered both the Prime Minister and the World Bank, as the illegal logging puts the government in breach of its agreement with the Bank for the Forest and Conservation Project.

The PM has publicly endorsed the FCP but the revelations about Iamo’s duplicity have now endangered the future of that programme and further World Bank funding for projects like the Highland Highway rehabilitation.

The suspended Secretary was also condemned in last year’s Ombudsman Report on Kamula Dosa that recommended his removal from the National Forest Board.

With the suspended Secretary clearly implicated in facilitating illegal logging and the Minister for Forests, Minister for DEC, Prime Minister, the Ombudsman and the World Bank all with serious concerns, the Government must surely act if it is to maintain its commitment to integrity and good management in the public service. 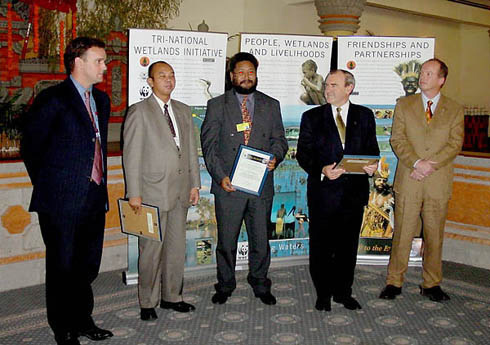 An independent review ordered by the government states that in the last 12 months Dr Iamo has played a pivotal role in two illegal logging deals.

In his role as Chair of the National Forest Board, Dr Iamo ‘seriously misled’ the Minister for Forests and facilitated an amendment to the West Gadaisu timber permit that was ‘improper and in breach of the Forestry Act and Forest Policy’.

Effectively Dr Iamo lied to the Minister for Forests in July 2002 when he told the Minister that the National Forest Board had considered and approved an amendment to the West Gadaisu timber permit to include logging of Bonua Magarida.

The truth is that the Board did not consider the matter until September, two months after the Minister had granted the amendment.

The amendment was in any event totally illegal as it ignored numerous different requirement of the Forestry Act and did not have the consent of the resource owners.

What is even more alarming and nails Dr Iamo as having been involved in some sort of conspiracy to facilitate illegal logging is the fact that the logging company application for the amendment to the timber permit was submitted on the same day as Dr Iamo gave his brief to the Minister recommending the amendment and stating the Board’s approval. How could anyone believe that a logging company could apply for a substantial amendment to its permit and on the same day the National Forest Board meet, consider and approve the amendment without any input from the National Forest Service or the Provincial Forest Management committee.

According to the government review this is not an isolated incident

In addition, in July 2002 a 10-year extension was granted to the logging permit for Vailala in Gulf Province. The Minister granted the extension on the basis of a form signed by Dr Iamo stating that the National Forest Board had considered and approved the extension. This was simply untrue.

The Board did not meet and consider the matter of the extension until September.

In any event the extension was completely unlawful as it was granted in breach of the Forestry Act and as correct procedures were not followed and there was no landowner consent.

In both cases, Bonua Magarida and Vailala, Dr Iamo has been exposed as lying to his Minister in order to secure illegal timber rights for logging companies.

The illegal amendment of the Timber Permit for West Gadaisu and the illegal extension of the Vailala logging project put the government in the embarrassing position of being in clear breach of their contract with the World Bank for the Forestry and Conservation Project.

This US$35 million Project to strengthen government departments and improve management procedures is contingent on the government ensuring that all new logging projects are lawful.

If the government cannot deal quickly and effectively with Dr Iamo and his illegal logging deals, then the World Bank is likely to be forced to not only close the FCP but to withdraw all funding support. This would include a promised US$80 million for the rehabilitation of the Highlands Highway.

Dr Iamo and the robber barons

According to an NEC submission prepared by the Minister for Forests, the government review of Dr Iamo’s illegal logging deals has concluded that:

The report identifies the people who are encouraging the robber barons as being Dr Wari Iamo and two former National Forest Service Managing Directors, Thomas Nen and David Nelson.

But this is not the end of Dr Iamo’s wrongdoing.

The Ombudsman recommended that Dr Iamo be removed from the National Forest Board.

The Minister for Forests must now be regretting his failure to act earlier on the Ombudsman findings as the removal of Dr Iamo from the Forest Board would have severely restricted his ability to facilitate illegal logging deals.

Interestingly the Kamula Dosa scam involved exactly the same logging company that is responsible for the illegal logging at Vailala – Rimbunan Hijau.

Charges of mismanagement and incompetence

In the light of his complicity in illegal logging deals, his assistance to the robber barons and his jeopardising of the Forestry and Conservation Project, it is important to remain focussed on the fact that that Dr Iamo is also facing 8 quite separate charges of incompetence and mismanagement in his leadership of the Department of Environment and Conservation.

According to an NEC Submission that will be presented later this month:

Eight specific charges have been laid against the Secretary, each one of which constitutes a ‘serious disciplinary offence’ within the meaning of the Secretary’s contract and gives rise to the power to terminate his employment