New reports from the Departments of Community Developed and Labor reveal the appalling conditions for workers employed by logging giant Rimbunan Hijau.

Papua New Guinean workers are forced to endure low wages, ‘cheating and dishonesty’ by the company, cramped and unhygienic living conditions, racial and sexual abuse and there is a complete disregard for their health and safety.

"The company’s treatment of its citizen employees reflects labor exploitation and slavery and should be condemned at all levels", says the Department of Labor.

Both reports contain allegations that the Police Task Force is "there to protect the interests of the company and their supporters and not citizens of Papua New Guinea" and that the police are ‘bribed by RH’.

The reports also record that in one logging operation alone there were over one hundred foreign workers and that the vast majority were there illegally, with no valid work permit or visa and most were employed in menial and semi skilled jobs that could easily be done by local workers.

The reports authors have called for immediate and drastic action against Rimbunan Hijau but this is extremely unlikely as RH has a wide network of corrupt politicians and public servants that protect the company from any effective action.

Officers from the Department of Community Development and Department of Labor have recently visited the largest logging operation owned and operated by Malaysian logging giant Rimbunan Hijau.

They inspected the company facilities and interviewed workers, company management and local people.

These Government Officers have bravely reported on a catalogue of abuses by Rimbunan Hijau that the company workers have to endure and which also adversely affect their families and the local people. 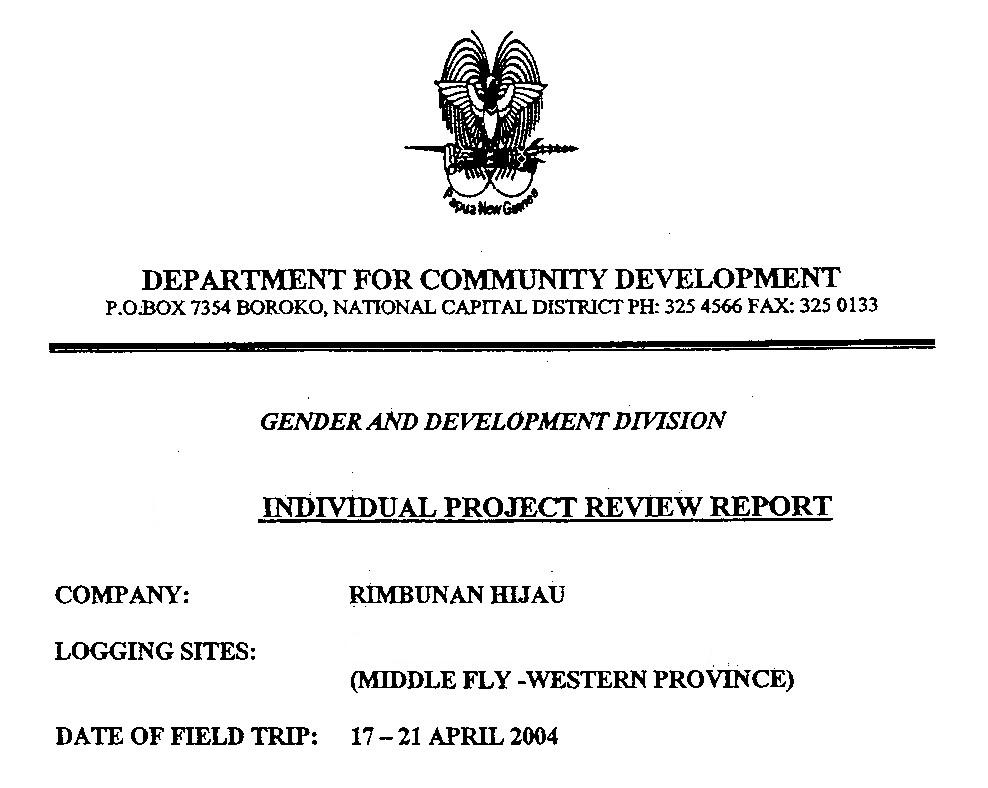 According to the Department of Community Development wages paid by Rimbunan Hijau are criminally low – just 63 toea an hour (that’s about 15 US cents). And wages have not increased for more than ten years.

And most of what is paid is then stolen back by the company as they force their workers to buy all their food and other supplies in company canteens. Here the prices are not displayed and the workers only find out how much they have been charged when they receive their wages with the money already deducted.

According to the Department of Labor, the prices charged are "exorbitantly high" and "this is absolutely cheating and dishonesty by the company".

Rimbunan Hijau also does not provide leave fares for its workers from outside the Province and of course wages are "totally insufficient" for workers to pay their own travel expenses, so they spend their leave time trapped inside the camp unable to visit their homes and families.

Local people and workers families are also prevented by the company from opening their own stores, and anyone who tries to trade is beaten up by the local police squad who enforce only ‘company laws’.

The workers are also forced to endure very cramped and unhygienic accommodation. Two families are forced to share a four metre square room with only a curtain to separate them and a single switch for the one light and one fan. For single workers, they are forced to live seven to a room.

Conditions are "appalling, with overcrowding and are totally unsafe".

Papua New Guinean women allege that they are forced to have sex with the company bosses and overseas workers. Some Indonesian women are also brought in to the camps (illegally) as sex workers.

These workers suffer appalling abuse as "Malaysians who have been involved are said to have put ball bearings into their private parts to boost their sexual desires, however, this has had very severe effects on the females they have sexual contact with".

Although the Community Development report ends with a plea for the Government to urgently address the situation of landowners, workers and the community at large, even the Minister, Lady Carol Kidu, seems powerless to act against the might of Rimbunan Hijau. 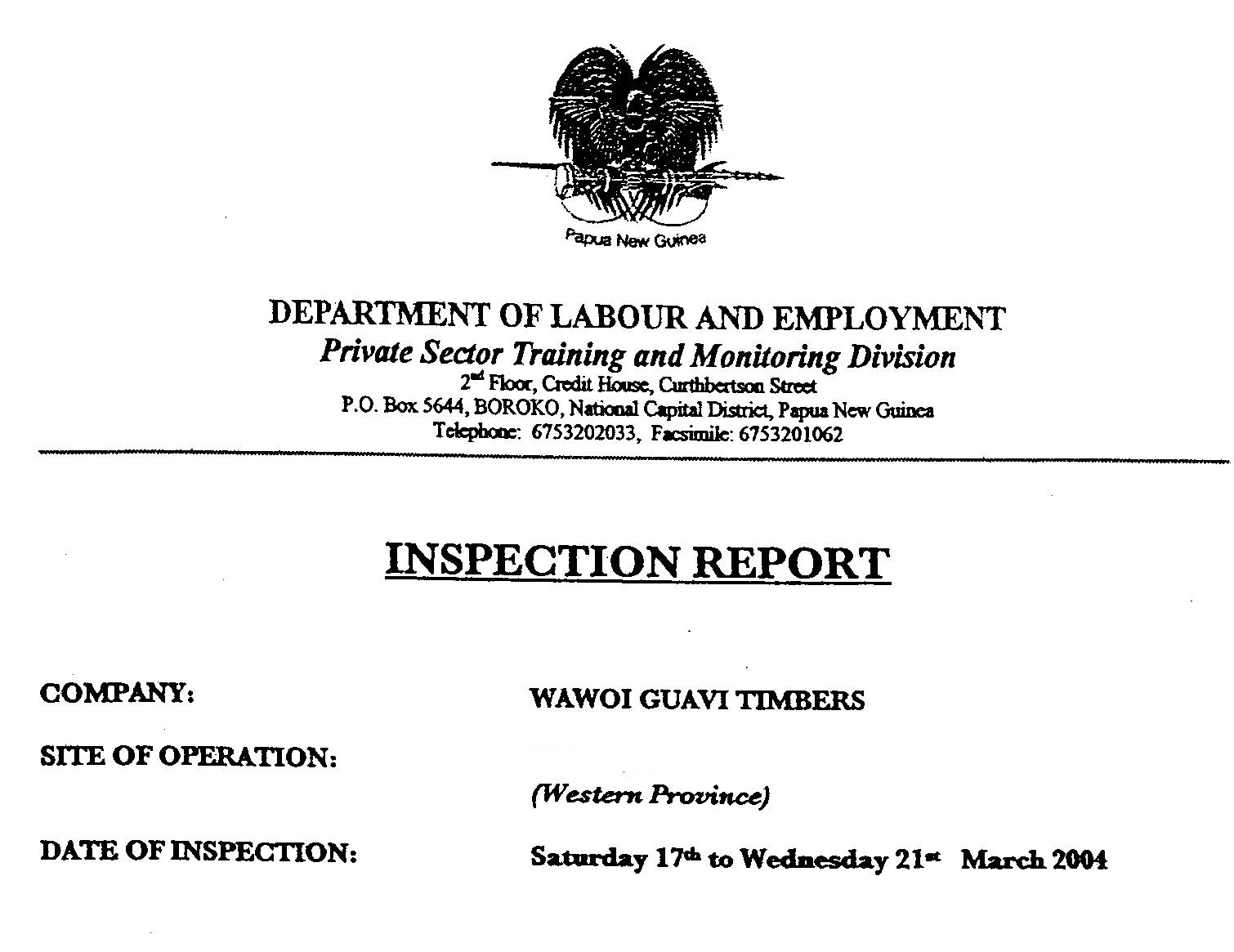 The Department of Labor report confirms that Rimbunan Hijau uses large numbers of illegal foreign workers in its logging operations, has no interest in the training and development of local workers and implements no health and safety practices to protect its workers.

In just one logging operation Rimbunan Hijau employs at least one hundred and ten foreign workers while there is just one Papua New Guinean in a management role.

In fact the company has approval for only 59 non citizen positions, meaning that "there are more non-citizens employed than positions approved". Imagine fifty three illegal immigrants in ONE logging operation!

But, in truth, the situation is even more serious, as only thirty one out of one hundred and twelve non citizens identified in the logging camps, are legally employed by the logging company. ONLY 31 out of 112. That is just 28%. EIGHTY ONE foreign workers in just one logging camp are there ILLEGALLY.

The Department report calls for the 81 illegal foreign workers, including the Operations Manager, to be deported……unfortunately our politicians will ensure that this direction is never implemented.

These are just a few quotes from the report on health and safety issues:

&quotThe level of safety practices and implementation is appalling and cannot be measured against any standard",

There is "absolutely no regard for safety and safe working practices"

The report concludes "the behavior by the company is totally unacceptable and must be penalized".

Rimbunan Hijau has often featured in the pages of Masalai because of the companies appalling record on social, human rights and environmental issues.

The Reports from Community Development and Labor only confirm that Rimbunan Hijau operates almost totally outside the law with no regard for the rights of Papua New Guinean people or the interests of the country.

It is a Malaysian multi-national that is destroying lives, raping our country and destroying our natural resources for its own gain and it is assisted by the selfish interests of corrupt politician and public servants and protected by its own newspaper, The National.