Sales of ‘The National’ collapse as public abandon logger’s newspaper

Documented sales of The National newspaper have fallen dramatically in 2004, with the newspaper loosing more than 5,000 readers this year.

In contrast sales of rival daily newspaper, the Post Courier have risen since 2003 and are still going higher.

The National is often referred to as the ‘Loggers Times’ as it is owned and operated by Malaysian logging giant Rimbunan Hijau and gives staunch support to the destructive forest industry..

The newspaper was established by RH to court favour with Papua New Guinea’s political elite and to attack critics who highlight the environmental and social destruction caused by logging companies.

But The National has suffered in recent months as Review after Review has heaped yet more evidence of appalling environmental, labour and social practices on the logging industry.

In particular there is overwhelming evidence that Rimbunan Hijau logging companies are involved in illegal logging, the abuse of local workers, human rights abuses against local people, terrible environmental pollution and illegal immigration as well as other criminal activity.

As well as The National, Rimbunan Hijau owns a string of other businesses in Papua New Guinea including the RH Hypermarket, Grand Palace Restaurant and Star Printers.

Official statistics from the Audit Bureau of Circulations show that The National newspaper is loosing readers – FAST.

In the first half of 2004, daily sales of The Loggers Times, as the National is widely known, fell by more than 5,000 copies to just 17,634 per day. This represents a staggering 23% decline in sales in just six months.

In contrast, the Post Courier has been experiencing modest growth this year with sales rising from 25,395 copies to 26,272 per day.

As a result the Post Courier’s lead in the circulation wars has now increased from just 11% last year to a massive 49%.

And according to Bob Howarth, Managing Director of the Post Courier, his newspapers sales are continuing to climb and are now over the 27,000 threshold.

This further cements the Post Courier’s position as the nambawan daily newspaper in PNG and is causing a few furrowed brows over at Rimbunan Hijau headquarters.

The National newspaper was established by Rimbunan Hijau in 1993 using a newly acquired company name, Pacific Star Limited, as a front.

The establishment of The National followed repeated complaints by Rimbunan Hijau about the press coverage that the company was receiving in other media. "Recently there have been lots of attacks on our company’s image, lots of slander and defamatory reporting"; complained the company in 1993

But, as the Association of Protestant Churches pointed out in 1995, ‘it was hardly surprising that newspapers like the Times of Papua New Guinea continually reported on this topic considering the numerous controversies over the logging activities of the Rimbunan Hijau Group’.

And many people in PNG have long been aware that buying The National is an act of complicity with the destruction and abuses of the logging industry. This letter was published in the Post Courier on the 18th of November 1993:

The National newspaper has been seen by many observers to have become more hard line in defence of the logging industry in recent years and more extreme and hypocritical in its editorial stance.

While the newspaper has filed many Editorials on the abuse of police power and reported incidences of police bashings and unprovoked violence around Port Moresby, The National has studiously avoided mentioning the overwhelming evidence that the PNG Royal Constabulary has been corrupted by logging companies who use police squads to protect company interests and inflict serious human rights abuses.

The name of Rimbunan Hijau has featured prominently in many of the Independent Reports of human rights abuses, labour abuses and sexual offences, but not one word has been published in The National.

The National pretends to be appalled by the corruption in our society and our failing public services. But it never mentions the serious allegations of bribes to politicians by logging companies and the illegal logging permits and unlawful project extensions.

While The National has decried the large number of Asian workers in food stores and canteens around our cities, it has ignored the fact that logging companies employ hundreds of illegal foreign workers in their remote logging camps.

We can only hope that the words of the Protestant Church back in 1995 are at last catching up with The National, 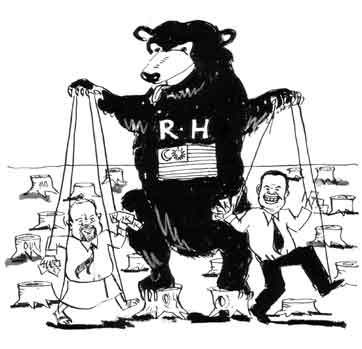