The Police Commissioner and RH - Drug smuggling and gun running?

New documents obtained by Masalai point to a sinister new twist in the relationship between Rimbunan Hijau and officers of the PNG police.

While Police Commissioner Sam Inguba has been busy trying to defend Rimbunan Hijau against a mountain of evidence of human rights atrocities committed by police officers on behalf of the logging giant in their remote camps, Masalai has been provided with hard evidence of drug smuggling and gun running.

While it is common knowledge that the Minister of Forests, Mr Patrick Pruaitch is in the pocket of the logging giant Rimbunan Hijau, it was not so clear that the Police Commissioner was an RH man as well.

The Police have been smuggling drugs on behalf of RH!

The Police Commissioner went to remarkable lengths to protect his officers when the Australian SBS made it clear for all that his officers were panel-beating villagers at the request of RH. "No proof" he claimed (Masalai 34). Masalai is wondering how the Police Commissioner will explain the documents in this edition that show clearly clandestine working relationship between Southern Command and Rimbunan Hijau.

Rumours about the involvement of logging companies in smuggling and illegal trafficking have been circulating in PNG for many years with snippets of evidence appearing occasionally in the media.

Logging operations provide the perfect cover for any number of illegal activities with log ships coming and going from remote logging camps far from the gaze of the media and any government officials.

Rimbunan Hijau is the largest logging company operating in PNG. The company is a Malaysian multinational based in Sarawak and is owned by a family of immigrants from the Fujan Province of China.

Rimbunan Hijau’s logging camps in Western and Gulf Provinces are as remote as any in PNG and they provide direct access into the heart of the Central Highlands – an area notorious for both drugs and guns. 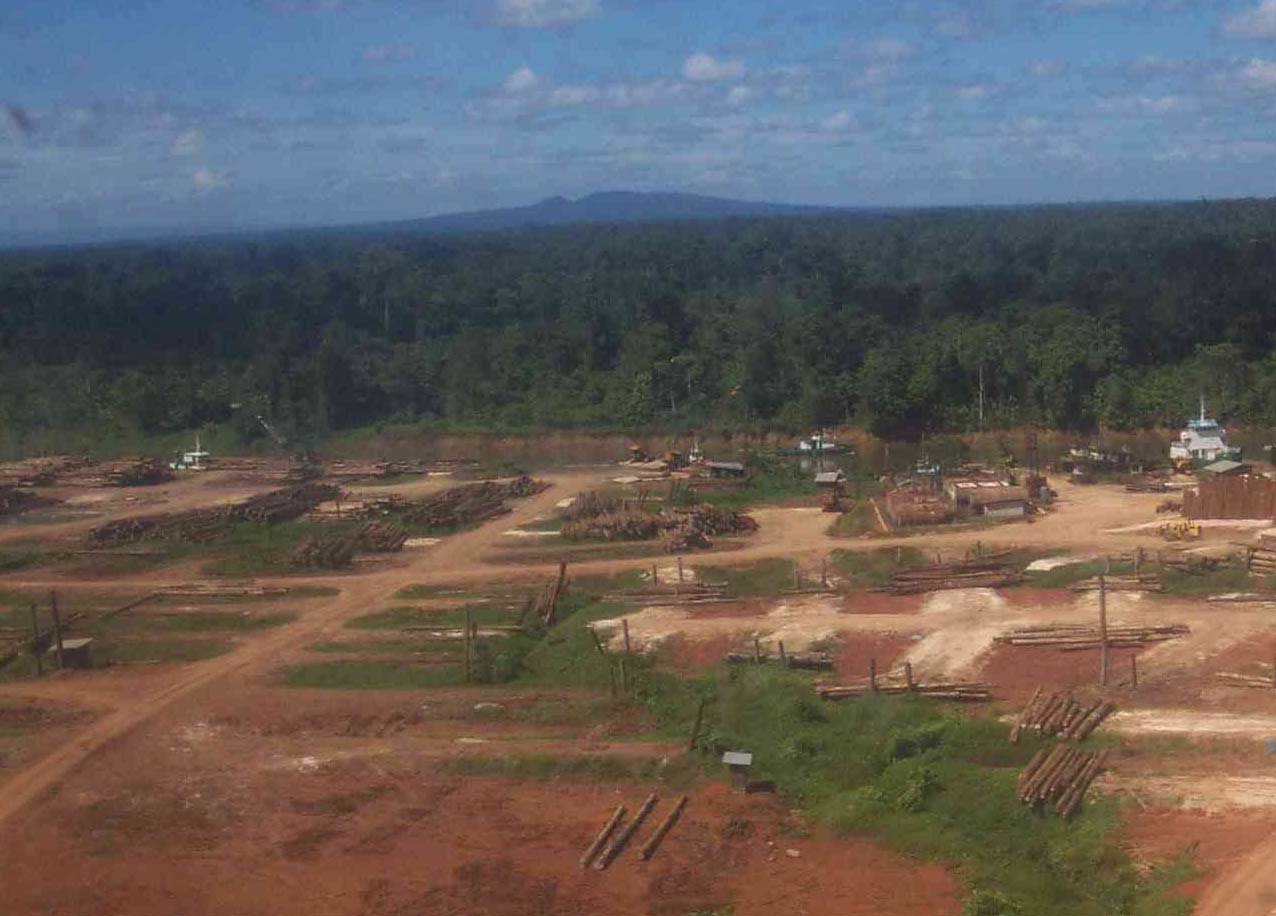 In this newspaper story from January 2002, a police officer explained how drugs are brought down from the Highlands to logging camps in Gulf and Western Provinces where they are traded for guns that are brought in on the log ships 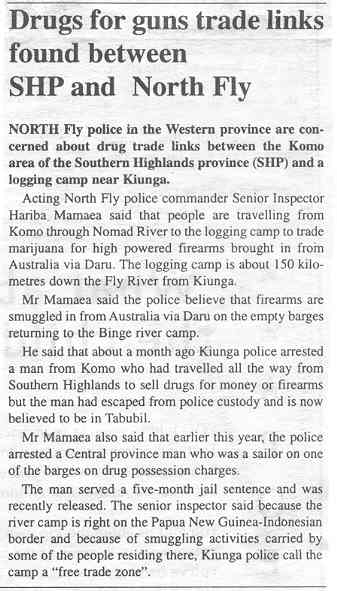 What Senior Inspector Hariba Mamaea probably didn’t know, was that his fellow police officers are used by Rimbunan Hijau to traffic drugs and guns on the company’s behalf.

This is revealed in a stunning document obtained by Masalai from a secret source – a signed letter, from the now infamous Sergeant Biamaga, to the senior manager of one Rimbunan Hijau company (Straits Marine) and copied to Mr Ling of Wawoi Guavi Timber (another RH company). In the letter Sergeant is Biamaga requesting further funds for a drug buying expedition to the Highlands.

As well as airfares, a cash advance and money for food and accommodation to send a named police constable to Tari in the Southern Highlands, Sergeant Biamaga openly requests from Rimbunan Hijau, K500 to buy 10 kilograms of "drugs". The only drug sold in 10kg bags in Tari is Marajuana

The letter is written on the letterhead of the Kamusie Police Detachment of the Royal Papua New Guinea Constabulary. Kamusie is of course a logging camp operated by Rimbunan Hijau inside the Wawoi Guavi logging concession in Western Province.

Sergeant Biamaga has become notorious as the leader of the Southern Task Force that has terrorised local people in Gulf and Western provinces on behalf of Rimbunan Hijau (Masalai 34).

Other documents obtained by Masalai, also attest to the close relationship between Rimbunan Hijau and senior commanders in the police force. This signed fax shows Chief Superintendent Marru informing Rimbunan Hijau that a total of fourteen police officers were being deployed at the company’s request.

The role of Rimbunan Hijau in importing guns into PNG was revealed in the recent Independent Review Committee investigation into the Operations of the Constabulary set up by the Minister for Internal Security.

According to documents filed in that inquiry, Rimbunan Hijau brings guns into PNG on log ships, stores them in its logging camps and then transfers them to the Highlands on its own Tropic Air Cessna jet.

The guns are disguised as bags of saksak (sago) and the Southern Command Task Force provide the security for the operations. 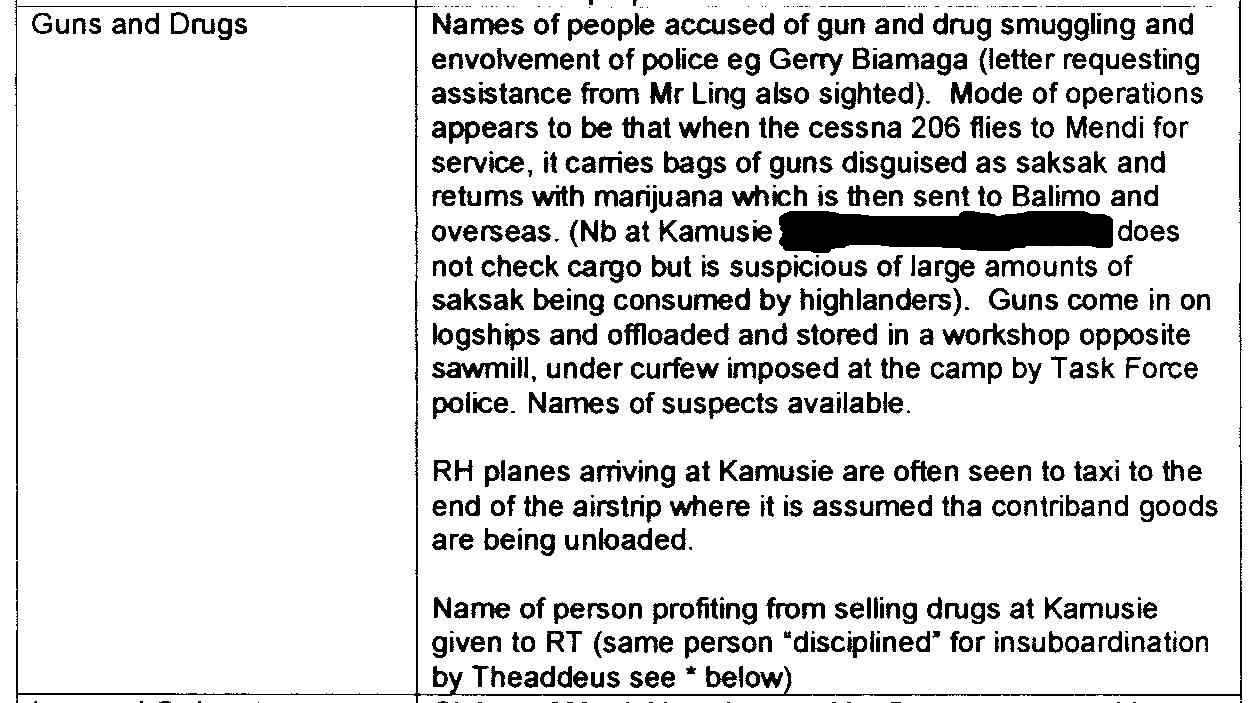 Just a few months ago police seized a large cache of guns from a logging camp manager in West New Britain Province. West New Britain was the heartland of Rimbunan Hijau’s logging operations throughout the 1990’s and they still maintain a number of camps on he island.

Of course, the involvement of politicians in funding gun purchases and arms smuggling is widely acknowledged. This was admitted by the then Prime Minister, Mekere Morauta, in 2002.

This explains some of the protection that Rimbunan Hijau now enjoys at the highest political levels – including it seems – that of the Police Commissioner.