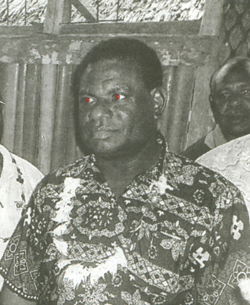 Forest Minister Patrick Pruaitch is ‘wrongful and corrupt’ and ‘dishonest’ – guilty of deliberate self enrichment and double dipping of the public purse.

These are the findings presented in a ‘Due Diligence’ Report prepared by the independent investigative firm, Quest Investigation International Limited, based in Port Moresby.

Quest was commissioned in 2003 to look at the financial affairs of the National Forest Service.

They found the Forest Minister had unlawfully claimed over K20,000 in payments for private and family expenses including airfares, hotels, car hire, fuel, overtime payments and club membership.

The behaviour of the Forest Minister is described as dishonest, improper and unethical’.

And the Report warns that unless effective action is taken against the Minister then the corruption that he is breeding is going to suffocate the whole of the National Forest Service as senior officers begin to follow the Minister’s lead.

But despite the Report having gone to the Ombudsman Commission, Fraud Squad and the Prime Minister for action under both the Leadership Code and the Criminal Law, the Minster has not been stopped.

Patrick Pruaitch continues to cheat and steal from the public purse as well as blatantly protecting the interests of the cruel and destructive Malaysian Logging Industry.

Below we set out in detail the findings from the Independent Investigation and the supporting evidence of corruption – including claims of K 1,651 for lunch, K 1,953 for ‘drink’ and 1,600 kilometres driven in just three days!

In July 2003 the National Forest Service commissioned a highly reputable firm of forensic lawyers and financial specialists to carry out a study of its financial records.

The ‘Due Diligence’ inquiry was commissioned primarily to look at the financial management of the National Forest Service and in particular the large annual sums of unbudgeted expenditure for capital assets, human resources and ‘extraordinary’ items.

The firm engaged to do the study, Quest Investigation International (http://www.karmally.com/index.htm) is a PNG registered company that has carried out a number of high level investigations for Government agencies and private business houses.

If you would like a copy of this report send us an email at masalai@masalai-I-tokaut.com

The exercise was carried out with the full cooperation of the staff of the National Forest Service and the investigation team had unlimited access to the financial records of the organisation. The team was based in an office in the NFS Headquarters for the period of the investigation.

The Review results were presented to the Managing Director of the National Forest Service in a 218 page Confidential Report at the end of July 2003.

The Report includes 56 specific recommendations to improve financial management within the National Forest Service and to ensure good governance and transparency.

The Review Team found during the course of their investigation that one of the reasons that the expenditure of the National Forest Service was so out of line with its budget predictions was that large sums of money were being reimbursed to the Forest Minister.

The Review Team looked at each of the financial claims coming from the Minister and concluded:

The evidence that forms the basis for this very clear and direct indictment comes from a wide range of claims on the public purse including overtime payments for security guards; fuel claims for a total of six vehicles; air tickets, travel allowances and hotel accommodation for security guards and others; car rentals; entertainment bills and club memberships.

As well as these unlawful claims, the Review also found that there were a large number of material inconsistencies in the claims being made and that often the documentation to support the claims was contradictory or incomplete.

We shall now look in detail at each of the matters uncovered.

In the four month period under investigation the National Forest Service paid K4,675 in ‘overtime payments’ for two security guards employed by the Minister.

The report also notes that there have been instances where the National Forest service has paid airfares, travel allowances and hotel accommodation for the security guards. Again, the guards were not employees of the NFS, the NFS did not authorise the travel and the Minister would have been claiming security allowances from the National Parliament

On 20th March K 2,516 was paid on a claim submitted by the Minister for car rental in Lae. The accompanying pro-forma invoice was from the Queen Emma Lodge in Rabaul. No receipt was ever submitted to show that the money was really paid. The claim included a mileage charge for 1,500 km – do you believe that?

On the 2nd of April K 3,797 was paid on a claim submitted by the Minister for a 3 day car rental by his research officer who was supposed to have travelled to Wewak.

On 21 June the Minister was reimbursed K1,171 for car hire in Port Moresby while his private car was being serviced. This was despite the Minster having two vehicles already on permanent allocation from the NFS.

This is just blatant theft from the public purse.

On 11 April a further K1,057 was paid on a claim by the Minster for car hire in Port Moresby. This claim was supported only by a pro-forma invoice with no receipt.

On 2nd April air travel, accommodation and allowances totalling K2,005 were paid by the National Forest Service for a trip by the Ministers Research Officer to Wewak.

Including other expenses, NFS paid almost K6,000 in total for a trip by the Ministers staffer to ‘pick up documents’.

The research officer is not employed by the NFS but is part of the Minister’s private office for which he is paid by Parliament.

In the period under review the Minister claimed K3,021 from the National Forest Authority in fuel expenses for a total of six cars. The Minister is only entitled to one vehicle from the NFS and is paid a vehicle allowance by the National Parliament.

The Minister has insisted that the National Forest Service provide him with two official vehicles when the normal Ministerial entitlement is only one.

On 27th March the Minister was paid K2,426 as reimbursement for various entertainment expenses including K1,953 for drinks at the Sandaun Motel in Vanimo and K254 for lunch at Airways Poolside.

This is quite some bar bill!

The claims made by the Minister were supported only by cheap hand made receipts and photocopied (rather than original) invoices.

The claims also ignored the fact that the Minister is paid an Entertainment Allowance as part of his fortnightly salaries.

On 2nd June the Minister was reimbursed K902 for a lunch at the Vanimo Beach Resort.

On 18th March the Minister was paid K1,651 as reimbursement for a lunch for three at the Golden Bowl Restaurant in Port Moresby…… K1,651 for lunch……for three people….come on Minister, you are just a common thief….

On 10th March the Minster was reimbursed K680 for his membership fee for the Port Moresby Car Club and that of the Secretary for Environment Wari Iamo – which he claimed he had also paid.

The Report ends with some very clear conclusions about the conduct of the Minister and its impact on the National Forest Service and it gives recommendations for further action.

Unfortunately it appears that nobody has taken any action on the Reports recommendations for prosecution of the Minister.

As a result the National Forest Service has crumbled with almost the entire organisation either involved in corrupt and criminal acts or silenced by the fear of retribution.

In the next Masalai we will look at anther aspect of the fraud and corruption that surrounds the Forest Minister – his unquestioning defence of logging giant Rimbunan Hijau in the face of overwhelming evidence that the company operates totally outside the law and is guilty of inflicting slave like conditions on its local employees while employing high numbers of illegal foreign workers.

If you would like a copy of the QUEST INVESTIGATION INTERNATIONAL report on Patrick Pruaitch send us an email at masalai@masalai-I-tokaut.com