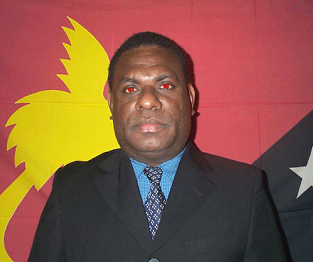 The Minister acted totally outside his powers when he: [1] over-ruled a decision of the National Forest Board; [2] instructed the National Forest Service to follow his orders; and [3] issued instructions to stop a process to close an illegal RH logging project.

The evidence we present below shows clearly how

&nbspThe Minister, Patrick Pruaitch, has no regard for the law or proper process when it comes to following RH orders

This paper trail shows another blatant case of unwarranted and illegal political interference in due process and a further demonstration of RH's control of the Minster for Forests.

The Forest Minister should hang his head in shame, acknowledge that he has been exposed as a servant of his Malaysian masters and resign. But we know this will not occur. We can only hope that it is not too long before the Ombudsman Commission and the Public Prosecutor beat a path to the Minister’s door and haul Mr. Pruaitch before the Courts.

It is a Malaysian owned multinational corporation that has logging operations across four continents.

The catalogue of official Government reports condemning RH’s illegal activities is extensive and the agencies involved include the National Intelligence Organisation, the Ombudsman Commission, Department of the Prime Minister, Department of National Planning, Department of Labor and Department of Community Development.

Internationally RH’s logging operations in PNG have been condemned in New Zealand, Australia, London and even Washington by groups as diverse as the world’s largest banking institution, a national timber trade association, a Federal Forestry Minister and a High Commissioner.

But mysteriously RH has always escaped any investigation or sanction from the bodies designated to manage our forest resources and control the activities of logging companies – the National Forest Service, National Forest Board and the Minister for Forests.

Now Masalai can reveal the truth behind this amazing lack of culpability:

Rimbunan Hijau is able to manipulate the Forest Minister, Patrick Pruaitch, to ensure that its logging operations are protected from any liability for their gross environmental destruction, illegal logging, slave like working conditions and other abuses.

One of Rimbunan Hijau’s many logging operations in PNG is the hugely profitable Vailala Blocks 2&3 project in Gulf Province.

Thus is one of the largest logging operations in the country and covers some 268,000 hectares with an annual allowable log harvest of 300,000 cubic meters (worth over US$ 20 million a year)

This logging project has been surrounded in controversy since its very beginning and is completely illegal.

ILLEGAL because in June 1992 when the Government gave Rimbunan Hijau the right to harvest the logs in Vailala 2&3, the Government did not own those rights as they had not yet been acquired from the landowners.

ILLEGAL because the timber permit issued by the Minister had not been prepared by the Forestry Department.

(The timber permit was also highly suspicious because it was granted just days before the new 1991 Forestry Act came into force. The Act had actually been passed by Parliament 12 months earlier, but the Government delayed its implementation for one year so it could push through a whole raft of new permits under the old Act!)

ILLEGAL because when the National Forest Service eventually acquired the timber rights from the landowners in December 1995, those rights were not allocated according to the Forestry Act. All the steps in the Forestry Act requiring Project Guidelines, a Development Options Study, Open Tender, and selection of the logging company were ignored – Rimbunan Hijau was just allowed to keep logging.

ILLEGAL because the original timber permit expired in June 2002 and is now null and void.

The National Forest Service claims that the permit has now been extended. But that claimed ‘extension’ is itself unlawful because [1] it was done three days after the original permit had expired; [2] the Forest Board began processing the extension on January 3rd 2002, 3 days BEFORE any application had been made by the logging company; [3] the Forest Board resolution approving the extension was not made in a Board meeting; [4] the Board resolution was not voted on by the required quorum of six members; [5] the Provincial Forest Committee only voted to approve an extension after the permit had already expired; [6] the Provincial Committee report does not comply with the Forestry Act as it does not deal with the past performance of the logging company or the issue of sustainability; and [7] in breach of the Act no landowners attended the Provincial Committee meeting that approved the extension.

After reviewing all the evidence, the 2003 Review of Permit Extensions concluded that the extension was patently unlawful and recommended that logging operations be immediately suspended. The Government, National Executive Council and Forest Minister have all studiously ignored this report and its recommendations.

ILLEGAL because the current logging is not covered under an approved Environmental Plan. The original plan expired in June 2002 and the Department of Environment and Conservation has closed the project file.

ILLEGAL because the 2003 Review of Current logging operations found a whole catalogue of abuses. These include major and extensive failures under the Logging Code of Practice; labor abuses including net wages of less than K10 per fortnight; a failure to register any vehicles; unskilled and semi-skilled foreign workers; no permanent roads, bridges or culverts in breach of the timber permit conditions; human rights abuses by police officers engaged by the logging company; poor quality infrastructure benefits; and other broken promises.

The landowners of Vailala are understandably pretty upset by twelve years of illegal logging by Rimbunan Hijau on their land and all the broken promises as well as the environmental damage and pollution they have suffered.

But, when you live in the remote and inaccessible forests of Gulf Province with no access to Government services or even basic communications systems it is pretty hard to make yourself heard. This is especially true when Rimbunan Hijau is able to fly in police mobile squads whenever anyone raises a voice in protest. This shown in an extract from the files of the National Intelligence Organization: 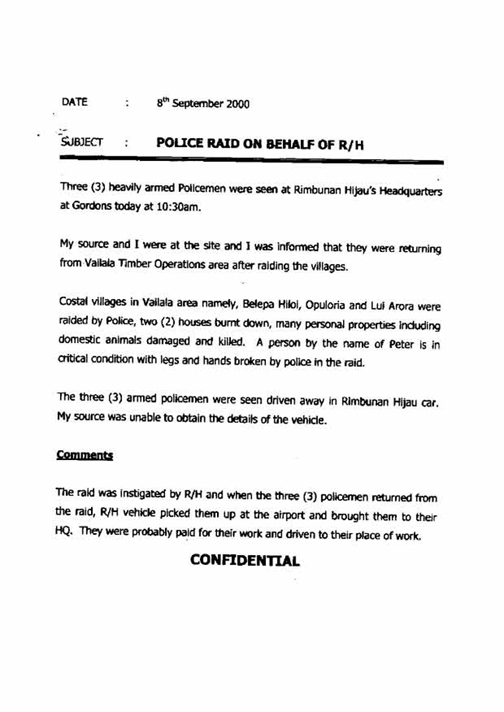 However, against all the odds the landowners were able in 2003 to launch a Court action against Rimbunan Hijau for illegal logging and environmental abuse, and they obtained court orders stopping the logging operations.

The judge in the case, Justice Sevua, commented, ‘the Forest Minister and State are not concerned at all in the interests of simple village people who own the forest resource and they turn a blind eye to the cries and concerns and rights of ordinary people’.

Unfortunately the landowners resolve was not enough against the mighty power of Rimbunan Hijau and its network of corrupt politicians.

In Masalai Number 27, May 2004, we revealed how Rimbunan Hijau used its agent, Jamie Maxton Graham, to bribe and intimidate the landowners to stop their Court action.

But still there was still one hope that truth and justice would prevail.

Though a painstaking and grueling series of negotiations with the logging company, the NFS officers insisted that the allowable annual harvest of logs had to be reduced from 300,000 cubic meters to around 100,000.

This reduction was necessary to make the logging sustainable and bring it into line with both the Forestry Act and the Constitution.

But Rimbunan Hijau would not budge.

The negotiations were totally stalled by April of last year and the NFS officers sent the matter up to the National Forest Board for the Board to decide on the next steps.

On hearing that the negotiations were totally stalled and that the logging company refused to lower its annual cut to the level necessary to make the project sustainable and ensure compliance with the Forestry Act, the Board resolved that Rimbunan Hijau should be issued with a ‘Notice to Show Cause’ why its logging operation should not be closed.

Of course Rimbunan Hijau’s representative in the meeting Stanis Bai did not vote for the resolution, but without the more aggressive Bob Tate or Dick McCarthy there to bully the Board, honesty and truth were able to rule the day.

Unfortunately our story does not finish there. Faced with the closure of one of their largest illegal logging operations, Rimbunan Hijau swung into action.

The first CORRUPT move came from an interesting and perhaps unexpected quarter; the PNG Chamber of Commerce.

How do we know all this?

Because we have a letter from James Lau, dated 7th May 2004 (see below), admitting that he received a briefing from the Forest Industries Association on the confidential proceedings of the National Forest Board.

James Lau’s letter also reveals the second CORRUPT act. Lau’s letter is addressed to the Minister for Forests, Patrick Pruaitch. In the letter Lau complains about the National Forest Board decision to issue a Show Cause Notice to Rimbunan Hijau and Lau asks the Minister to "immediately intervene".

Why should the boss of a Malaysian logging company expect a Government Minister to unlawfully intervene on the company’s behalf in the due process of the independent National Forest Board?

Why would Rimbunan Hijau ask the Minister to act illegally on their behalf? 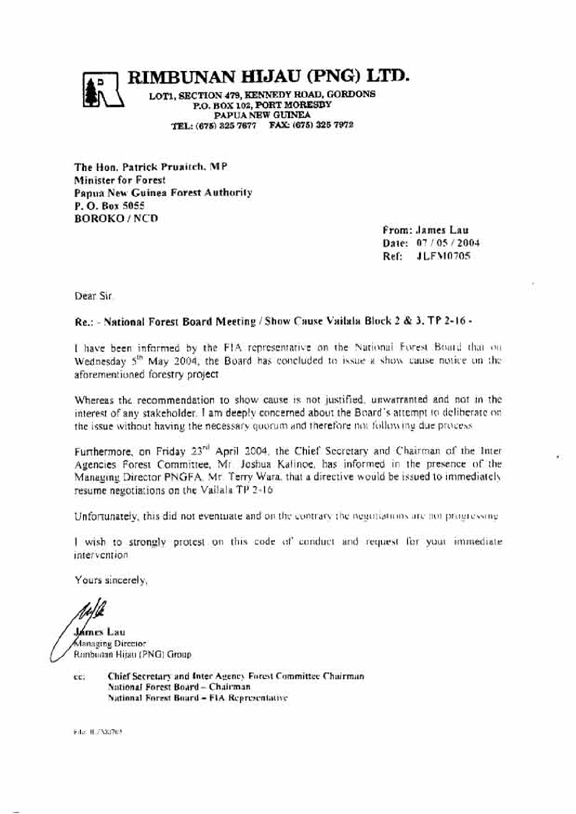 How did the Minster for Forests react to Rimbunan Hijau’s letter?

The Minister acted CORRUPTLY and did exactly what Rimbunan Hijau asked of him! 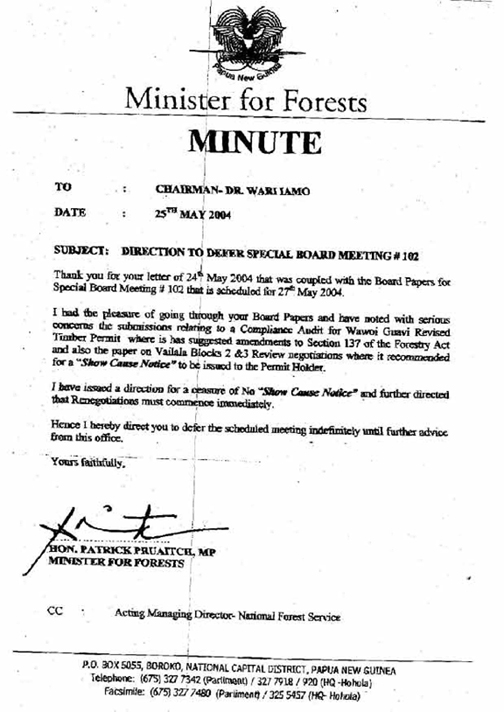 The actions of the Minister for Forests were totally unlawful on five counts:

1. &nbspHe illegally over-ruled a legitimate decision of the National Forest Board

4. &nbspHe illegally deferred a meeting of the National Forest Board

5. &nbspHe illegally instructed the Forest Board to defer to his further instructions

What these documents show is that we have a CORRUPT National Forest Board member working with a CORRUPT Malaysian logging company and its CORRUPT Forest Minister to ensure that our forests are illegally raped by Rimbunan Hijau.

In accordance with the Minister’s wishes, the National Forest Board did not meet as Scheduled on the 27th of May and their meeting was deferred to the 8th of June – allowing plenty of time for the Minister to bring the Government representatives into line.

The Board was told that ‘there have been representations made by the company to the Government to reconsider the Board’s decision’.

The Board knew that the Government and the Forest Minister have no powers to direct the National Forest Board on operational matters or to interfere in due process, but sadly the Board (with three Government Department Heads present) rolled over and gave in to the blatant political interference.