Kikala, another recruit to the logging mafia

Philip Kikala, one of PNGs most senior civil servants, has recently started to engage in activities that firmly suggest that he is a member of the informal mafia amongst politicians and public servants that unlawfully supports the logging industry.

In the last few weeks Kikala has tried to disrupt the Court action against Minister Michael Ogio’s unlawful appointment of David Nelson as the Managing Director of the Forest Authority and he has tried to unlawfully grant approval for an illegal timber permit.

Philip Kikala is the Secretary of the National Planning and Implementation Department. He was appointed earlier this year after the previous Secretary was controversially removed by PDM Minister Andrew Kumbakor (who is himself now facing a leadership tribunal on various counts of misappropriation and other wrongdoing). Mr Kikala is also a member of the National Forest Board by virtue of his position as Secretary of Planning.

In May 2002 the National Forest Board instigated a legal action to remove David Nelson as the Managing Director of the PNG Forest Authority. This was because Mr Nelson had been unlawfully appointed by the Minister for Forests and Deputy Prime Minister Michael Ogio.

The Prime Minister, Sir Mekere Morauta, has openly supported the court action brought by the National Forest Board and has agreed that the appointment of Nelson did not follow proper procedures (see below). Meanwhile, Ogio has consistently ignored a demand from the PM that Nelson be removed(see below).

But now Philip Kikala has weighed into the debate on the side of David Nelson and Minister Ogio, effectively taking up their case against the Prime Minister and the rest of the National Forest Board.

On July 16th Kikala issued a Board Circular stating (falsely) that the Board had not endorsed the legal action against Nelson and Minister Ogio and expressing his support for David Nelson and encouraging the rest of the Board to put the matter "to rest" (see below).

This Circular prompted a swift response from the Chair of the National Forest Board, Dr Wari Iamo, who described Philip Kikala’s views as "grossly misleading" and "utterly distorted" (see below).

Dr Iamo has accused Kikala of failing to observe "good Board and management practices" and of ‘destabilizing’ the Board.

But this is not Mr Kikala’s only unsavory and highly questionable intervention in forestry issues in recent times.

On May 3rd 2002, Philip Kikala signed a ‘Consent to the Grant of a Timber Authority’ for the Simbali area in East New Britain (see below).

This action by Mr Kikala was unlawful, as the National Forest Board had not given any approval for him to sign official documents on behalf of the Board. And his intervention was totally unnecessary as the full Board in fact met on May 3rd and the Consent could and should have been signed by the Chair of the Board.

The ‘Consent’ signed by Mr Kikala is also totally illegal as the proper procedures and necessary legal steps set out in the Forestry Act have not been followed.

The Chair of the National Forest Board has now issued a written request to Mr Kikala for him to "refrain from signing any documents on behalf of the Board and stop signing any Contract Papers and other important permits and licenses" (see below). 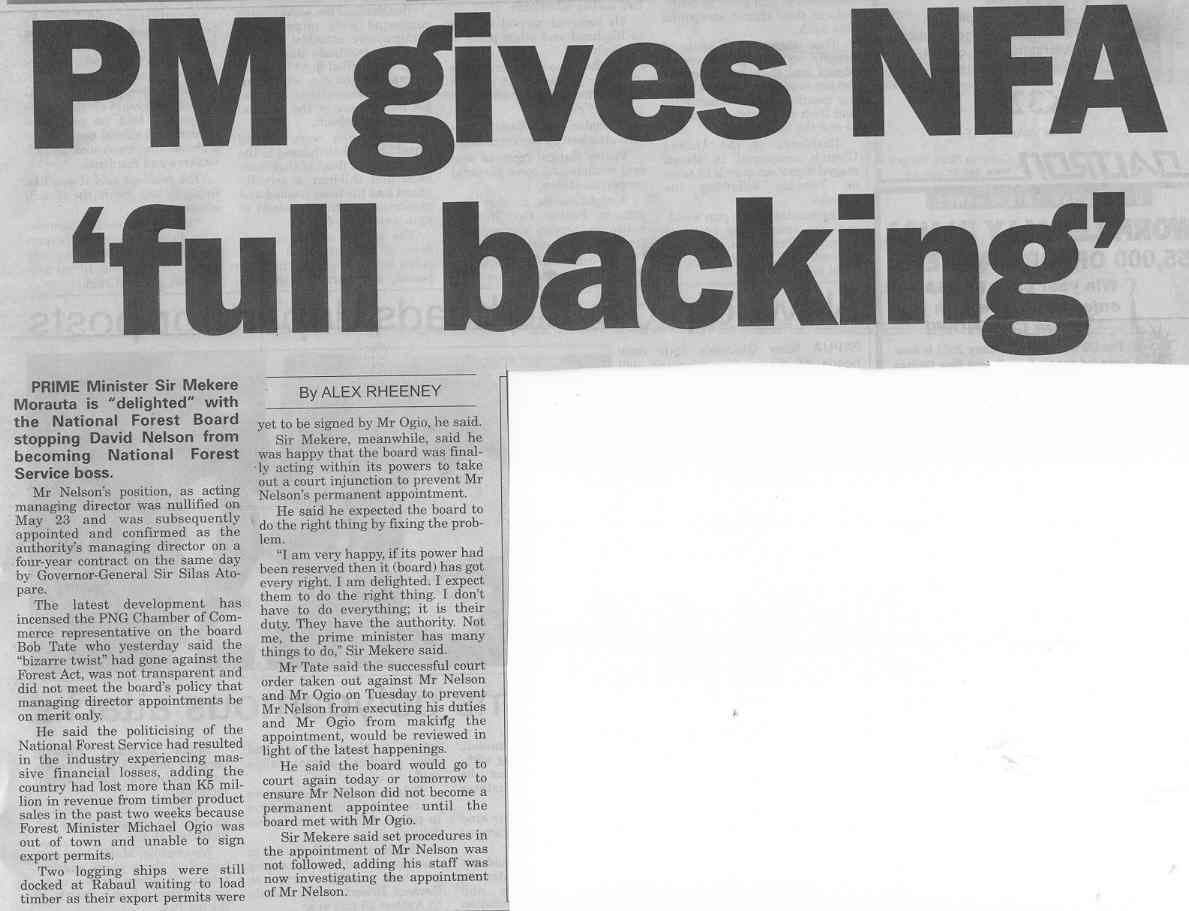